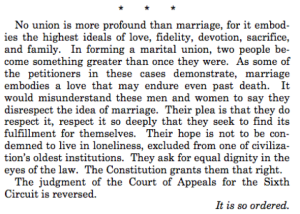 The last paragraph of Justice Kennedy’s majority opinion, in which same-sex marriage was made legal in the US.

“Let every person be subject to the governing authorities; for there is no authority except from God, and those authorities that exist have been instituted by God. Therefore whoever resists authority resists what God has appointed, and those who resist will incur judgment.” – Romans 13:1-2

One of my pet-peeves is when people ignore the context of Scripture. When people, who I assume are well-intentioned, pull a Bible verse written thousands of years ago by people from a different race and culture and time and try to directly apply it to a modern problem. One of the fun things to do is read these shared out of context verse while keeping their original context in mind. Ie when people talk about how God blessed them so much then quote Jeremiah 29:11; I laugh about how God is about to let them get conquered and enslaved. Or when people quote Philippians 4:13 but use it to encourage themselves to gain something selfishly, when the verse was Paul reminding the church in Philippi that he could handle suffering in prison with Christ’s help – not lift a heavy weight or get that promotion. Turning my pet-peeve into an enjoyable pastime was fun.

It was fun until a certain Supreme Court ruled in favor of marriage equality. Then people started talking about “sin” and quoting Romans 1 (because they’ve learned to stop abusing Jewish laws in Leviticus they don’t understand to excuse their own personal beliefs about other people’s sexual orientations). But the problem with Romans chapter 1:22-32 if one interprets it to be about same-sex monogamous relationships is that it is tied to another passage, Romans 13:1-7 (which included a lot about taxes, and Americans are real touchy about taxes so I left that part off). In context, the church in Rome was facing persecution, Christians were being killed – levied with heavy unfair taxes, literally burned alive. It is in that context that the Apostle Paul told the church that those in authority; the ones killing Christians, have been put there by God and that Christians should not resist them.

What does that have to do with marriage equality? Well it depends on what verses of the Bible you decide to take literally. The idea that God could want LGBT people to be treated fairly under the law makes some Christians uncomfortable, so I’m sure before they reached this paragraph they’ve already done the theological gymnastics necessary to avoid treating their LGBT neighbors with kindness, love and empathy. But Romans 13 seems to imply (pretty explicitly) that government does the will of God – meaning marriage equality would be the will of God since the government has now given it to the whole country. But that’s only true if one takes Romans 13 as literally as some people take Romans 1 or Leviticus 18:22.

Realistically speaking, all Christians pick and choose which verses to take literally, if they take any literally at all – what really matters is following the example of Jesus Christ. Which all Christians have trouble doing, some it’s difficult following Christ when it comes to loving and affirming LGBT people, others when it comes to personal piety, some find it hard to move past racist upbringings others find it hard to love and forgive the racists in their midst. Regardless of which “sinful lifestyle choice” one is “struggling with”, abusing the Bible to shame others isn’t going to make you a better person. In fact, if Jesus was right, being with others – even those different than you, is what makes you a better reflection of God’s nature. Mostly, because that’s what Jesus did.